Since the benefits of running on health and fitness are well-known, this sporting activity has been growing in popularity for more than 20 years. However, running is also associated with a high risk of getting injured. No less than 50% of runners experience a minimum of one injury over the year, and 25% of runners are injured at any time of the year. To date, the risk factors for running-related injury (RRI) are not fully identified and understood. Principally, a great part of the runners could prevent injury if they had been aware of errors in scheduling or training load. Therefore, novices seem to be a high-risk population! However, in the light of the existing literature, it has never been definitely established if running experience is a significant risk factor.

Therefore, the “RRI-12” study conducted by the Sport Medicine Research Laboratory (SMRL) of CRP-Santé aimed to investigate the influence of running experience on the incidence of RRI. An observational study was performed over 5 months from January to May 2012. Participants accepted to record their sporting activities in the TIPPS every week, to report all injuries observed during the follow-up, and to go running minimum once a week. This protocol aimed at establishing the relationship between intrinsic factors (age, body mass index, sex and running experience) or training characteristics (frequency, volume, intensity…) and RRI occurrence.

A total of 308 runners created their account on www.tipps.lu and started encoding their sporting activities in the TIPPS database on the 1st of January 2012. Runners were categorized as novices or experienced on the basis of their running practice over the 12 months prior to the study. Therefore, participants who reported less than 6 months of regular (weekly) practice in 2011 were considered as novices, and participants who trained regularly more than 6 months in 2011 were considered here as experienced runners.

At the end of the observation period (June 2012), the statistical analysis was performed on the data from 199 participants; the others had not been able to train regularly or had left the study before the end. Overall, the athletes who completed the study were a little bit older. A higher proportion of novices did not complete the study when compared to experienced runners. Finally, a great majority of the 199 participants were experienced runners (88%).

The average running session duration of experienced runners was superior to the one of novices (63.6 vs 60.9 min., respectively). However, the mean number of session per week was not different between both groups (2.5 sessions/week).

Another statistical approach allowed putting forward 3 significant risk factors in this study. The first one confirms our previous observation, as it highlighted that injury risk is higher for novices when compared to experienced runners. Additionally, it revealed that practicing other sports than running decreases the injury risk. Finally, previous injuries (sustained during the preceding 12 months) increase the risk to get a new injury (+60%).

A total of 139 RRI were reported. The major part (61%) of the injuries recorded throughout the study was progressive in nature (e.g. tendinitis), acute injuries (e.g. ankle sprains) being less frequent. The most afflicted tissues were muscles (48%) and tendons (19%). It is not surprising to observe that leg (22%), thigh (19%) and knee (18%) are the most frequently concerned body parts. The injury severity was assessed using the duration of each RRI. More than one in two of them (51%) were slight and allowed the runners to come back to a regular training after less than 4 days. 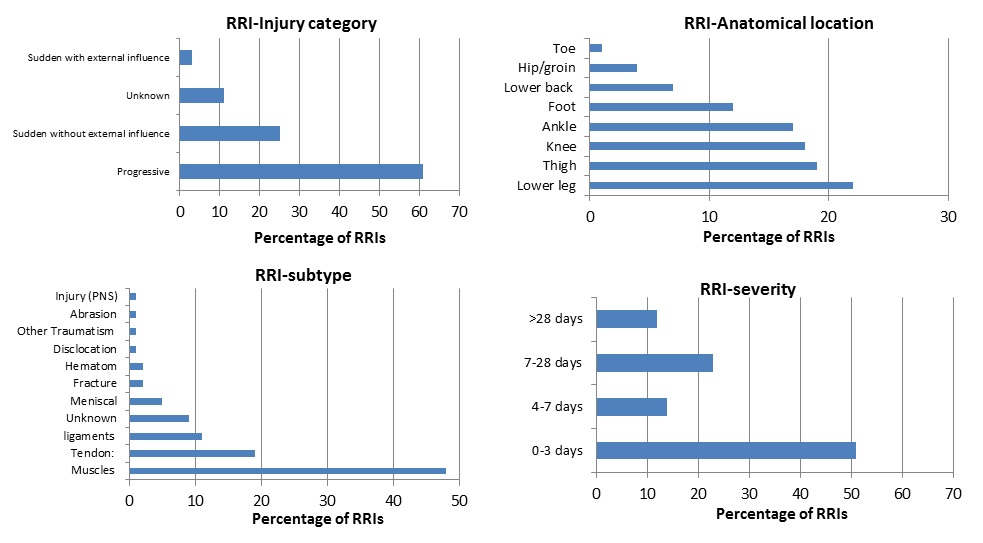 The RRI-12 study is an observational study conducted over 5 months and characterised by the follow-up of 308 runners with regard to their training pattern and injury occurrence. The data analysis from 199 compliant participants allowed highlighting the protective effect of running experience. The absence of previous injury and/or a regular practice of other sport disciplines decreases the risk to get a RRI. Age, BMI and sex are not related to RRI risk.

These results demonstrate that a novice runners represent a high-risk population. Therefore, it would be safer to follow a progressive and personalized training plan, which could be elaborated with the help of a professional coach. The association between previous injuries and RRI incidence demonstrates that a complete recovery is essential before coming back to a regular training program. It is also important to underline the beneficial effect of other sports, not only to improve overall fitness, but also for the complementary effect in terms of reduced RRI risk.

The fact that a large majority of the injuries recorded by the participants were progressive (also called overload injuries) and that these RRI mainly concerned muscles and tendons reveals that running generates inflammatory pathologies, certainly because of the repetitive nature of this sport. This should suggest us to pay attention to episodes of light pain, which could turn into an injury, and therefore to adapt the training plan if needed.

Better safe than sorry! It would be safer to regularly decrease the training volume and/or intensity to give your body enough time for a progressive adaptation to the workload. When looking for a quicker progression curve with a great part of intense training, runners increase their risk of RRI and could lose a lot more time!